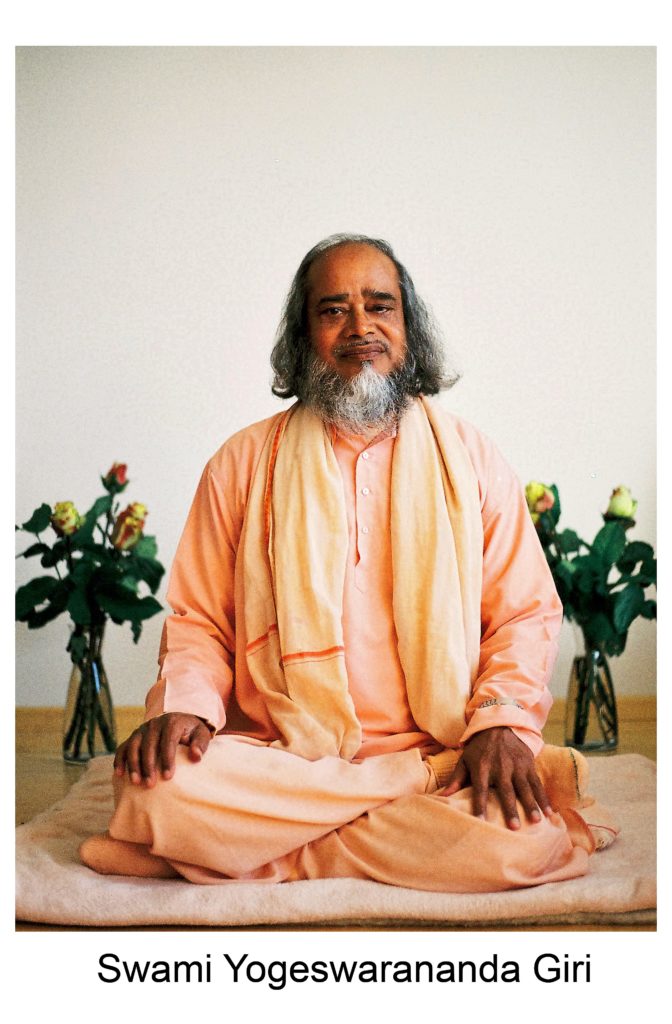 Swami Yogeswarananda Giri was born on 11 February 1954 in Orissa. Already in his childhood he had an extraordinarily strong spiritual desire.

In 1970 he received the initiation into Kriya Yoga from his master, Swami Hariharananda Giri, then president of the Karar Ashram.

In 1976 he entered the Karar Ashram as Brahmachari Santananda. In the same year he completed his studies in philosophy with a focus on Vedanta with a Master’s degree.

He has successfully passed through the six stages of the Kriya and realized the Nirvikalpa Samadhi, which is the highest spiritual state of consciousness.

In 1982 he attained the highest level of Kriya Yoga Nirvikalpa Samadhi.

In 1983 he was elected Sadhu Sabhapati (President) of the Karar Ashram.
In 1984 he was appointed by the Shankaracharya of Puri in his office (as successor of his Guru and former President Swami Hariharanada Giri).

He is currently the head and sole successor of the Karar Ashram in Swargadwar, Puri, Orissa, India, founded in 1903 by the world-famous Kriya-Yogi Sriyukteswarjee.

Today Swami Yogeswarananda teaches and spreads the authentic technique of Kriya Yoga as taught by Sriyukteswarjee for all serious seekers in East and West.

With this technique it is possible to experience the living presence of the divine within oneself, in the midst of daily activities. At the same time body, mind, intellect and soul of the human being are developed.

The human body is created for God-realization and Kriya-Yoga imparts this awareness of the divine within itself to the practitioner in a short time. One gram of practice is better than a thousand tons of theories. Theory brings man outward, but the Kriya Yoga technique leads man into his inner world. The human being experiences peace, blessing and bliss with a healthy body, soul and mind and finally attains liberation. The human being can experience in daily life that the soul is the actual doer of his everyday activities.